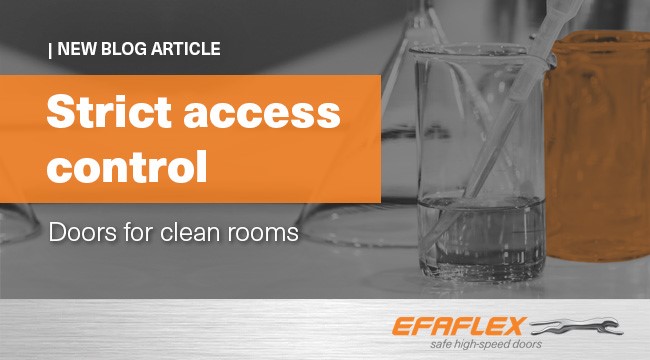 Anyone who works in a cleanroom understands the complex hygiene procedure even before entering the workplace: protective clothing must be put on. Everything that could contaminate the environment should be covered: shoes, hair and clothing are covered by a hygiene suit. Jewellery is removed, hands are disinfected, and a mouthguard is mandatory. In addition to the personal safety equipment of the users, access to the cleanroom is a critical point. It takes place via locks that are controlled by special doors. The EFAFLEX CR cleanroom series was specifically designed for the requirements of strictly controlled production areas and are used daily in various industries worldwide.

Cosmetics manufacturer Clarins relies on the EFAFLEX EFA-SRT-CR doors at its production site in Cergy-Pontoise, near the French capital Paris. They are used in the entire production area as well as demarking and separating different zones including the warehouse, the weighing of raw materials, the entrance to the conveyor system and the filling of the tubes and crucibles. High standards of hygiene and cleanliness apply to the cosmetics industry, which require cleanroom conditions. There is an overpressure of 30 Pascal in the entire production area. In order to ensure the tightness of the entrances under these conditions, the EFAFLEX doors are designed to be extremely airtight due to the close-fitting curtain guide. In addition, surface structure and an antistatic finish reduce particle adhesion. All doors installed at Clarins were made to individual dimensions. After a successful trial reference project, the decision was quickly made to order additional EFAFLEX doors, including new ones. 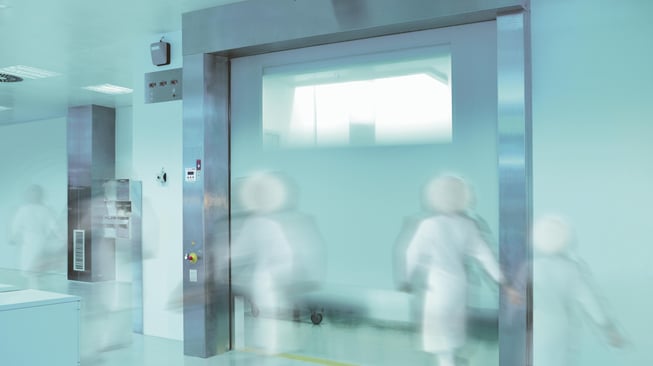 The Holzkirchen plant of the pharmaceutical company Hexal also relies on the special doors from Bruckberg. The first door from EFAFLEX was used here in 2003. "Other manufacturers (...) could not deliver doors of this quality," recalls Julia Gigl, Project Manager in the supply engineering of the pharmaceutical company. As with Clarins in France, Hexal quickly decided to order additional doors from the global leading German specialist, and to replace the door systems installed at the time with EFAFLEX products. At Hexal, the doors are used in the areas of solids production and development, as well as the production of plasters containing active ingredients. There, the doors of the EFA-SRT-CR series have to complete around 85,000 opening cycles per year and are an essential cornerstone of all processes: "The doors must not fail for us," explains Julia Gigl. “If a door failed to operate, it would not be possible to continue production without the protection they provide.

That is why we chose the reliability of the EFAFLEX high-speed doors. For an absolutely clean production, we need the pressure differences between the clean room and the anteroom."

As in other industries where work is carried out in cleanrooms, even the smallest impurities within the environment can cause expensive delays in the pharmaceutical industry. If the pressure loss in cleanrooms and locks is greater than 1 millibar per minute, within 15 minutes large amounts of microfine dirt particles get into the cleanroom when the doors are opened. This results in a greatly increased load on the air filter, which is causes an increase in costs. To prevent this, the door which control the production zones and their locks must be tight. The EFAFLEX high-speed roller doors for the cleanroom area achieve very high tightness values ​​due to their closed curtain guidance.

For Project Manager Julia Gigl, it is also very important that the doors are easy to clean. With the EFAFLEX doors, this is no problem thanks to the smooth stainless steel surface. The fact that there are no protruding edges also simplifies cleaning.

Thanks to the wide range of products and the possibility of individual customisation, companies can equip their entire production and logistics area with industrial doors from the German world market leader. Consulting, production, installation and service come from a single source: a real advantage that saves a lot of time.

EFAFLEX - meet the world market leader for high-speed doors that are both safe and efficient. Regardless of whether you are looking for successful large-scale customer projects, our own research or the excellent use of BIM: On this blog we will show you what our 1,200 employees are working on.